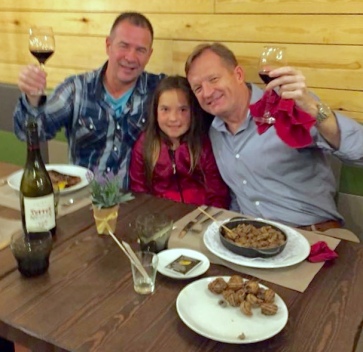 I am playing hangman with a nine-year-old girl in a village north of Barcelona.

Her mother tongue is Catalan, her second language is Spanish, but we are playing in English. She won with ‘bubbles’. It took the word ‘pygmy’ to beat her. She is nine, English is her third language and it took a word with no traditional vowel to defeat her.

Her linguistic skill is just one of a number of unusual things about playing hangman with a child.

I know Martina because I was best man at her parent’s wedding. Her father Marc and I used to play water-polo together at university.

While Martina and I played hangman, Marc was busy watching Barcelona play Seville in soccer. At the 17-minute mark of the game, the Barcelona fans chanted for Catalan identity. The 17-minute mark commemorates the date at which the Catalans mark the loss of their independence during the Spanish wars of Succession in the 1700s.

It was on my first visit to Marc’s hometown Hostalric two decades ago, that I came to learn of the Catalan independence that is so in the news now. I returned to listen to his family’s views on current events.

Marc’s father Miquel is a strong Catalan Independence supporter. In Miquel’s youth Franco had banned the use of the Catalan language and his independence spirit comes from his younger memories of repression. Hence it is no wonder that is was from Marc’s family that I received the videos of Spanish policemen using violence against Catalan firemen on the ‘referendum’ day a few weeks ago.

And in this hope is the great flaw of the Catalan Independence strategy. Europe cannot and will not help the Catalans, and this is why.

Spain’s constitution does not allow secession of a region. Is this fair?

Thirty years after the American Civil War the Australian constitution was drafted to remove secession doubt. Australia’s Constitution says the country is an ‘Indissoluble Commonwealth’. At a referendum in 1933, Western Australia voted to leave Australia by a margin of 66% for leaving and 34% for remaining. Yet WA remains in Australia.

Global practice as represented by Australia and US is that a non-secession constitution is quite fine. Yet Scotland voted on Independence, not the UK, as did Quebec and not Canada, but Russia didn’t recognise the referendum in Kosovo saying all of Serbia should have voted, but insists on recognising the vote in Crimea without all of the Ukraine voting.

International history and European current reality is more dependent on politics, than precedent.

And it is politics that is Catalonia’s greatest hurdle.

If Spain were to recognise the vote in Catalonia, what would it do in Gibraltar, the great rock off its south coast administered by the UK but claimed by Spain?

How could Spain possibly recognise Catalonia’s vote without giving up its claim to Gibraltar? Political realities dictate it can not.

But what of Europe?

If one were to recognise the vote in Catalonia, what of the Basques, Corsicans, Sicilians, Venetians, Prussians and others? Indeed, a recognition of secession of Catalonia could lead to a huge unravelling of the EU. So how could the EU national leaders possibly support Catalonia, if in doing so it would unravel their own countries?

But maybe the Catalonians should think differently about this and argue for the dissolution of the countries and the creation of an EU based on regions.

What if the EU did unravel? What if the European Union did become a Union of regions not a Union of nations? In the age of the EU, what does independence really mean anyway? What is the difference between a union of 27 States or a Union of 100 regions?

And can a peoples even be independent in the EU?

If Britain goes ahead and leaves the EU, then the politics of the EU will fundamentally change. Britain often argued against a directly elected EU President, a common defence policy and a European army. If Britain’s absence allows for the further EU integration, then what would Catalan Independence mean anyway?

The Catalans are not arguing to leave the EU. An Independent Catalonia in Europe would still have a European common currency, freedom of movement of workers, potentially a common European military and presidency. So, if the Catalan region were to leave Spain, yet stay in the EU, would they really be independent anyway?

It is this question that I sought to ask Miquel for which he hoped the Europeans would intervene. But the mistake is to assume the intervention of Europe without evolving Europe. It is also a question the EU should now ask. Will the EU evolve to be a Union of countries or a Union of regions? And if it is the latter, how could this be achieved without multiple wars?

And this is the reality check for the Catalans. If the Europeans do not agree on a peaceful transition to a Union of regions, then the EU can never, ever, support Catalonian Independence.

2 Replies to “Hangman and hanging of a dream – Catalonian Independence.”